I am proud to announce the 4th beta release of OpenShot 2.0! As you will see, lots of great progress has been made since the previous beta. Improved stability, especially for OS X and Windows, better performance, new features, and critical improvements to the OpenShot infrastructure (build servers, website, etc…). Download OpenShot 2.0.7 (Beta 4)

There were 2 really big issues with the previous beta releases: some Mac computers could not launch OpenShot due to incompatibilities between the CPU and certain libraries (compiled with brew), and random crashes with Windows during preview/playback. Both of these issues have been fixed, and a big thanks for all the testers who helped me with each experimental revision. I could write an entire update on these 2 points alone, they both took a huge amount of time to troubleshoot, and are reasonably well documented on Github.

General support for image sequences has been added in Beta 4. Just drop a single file from a sequence (i.e. 001.jpg, 002.jpg, 003.jpg, etc...) into the project files, and it will now prompt you to import the file as an image sequence. Doing so will create a single clip, and basically treat the sequence of images as a video file.

Added a new file properties dialog, which displays all known video/audio details about a file. It also allows the name, tags, and frame start/end to be modified for a file. And, for files without an audio track, it allows the frame rate to be adjusted (useful for animations / image sequences). 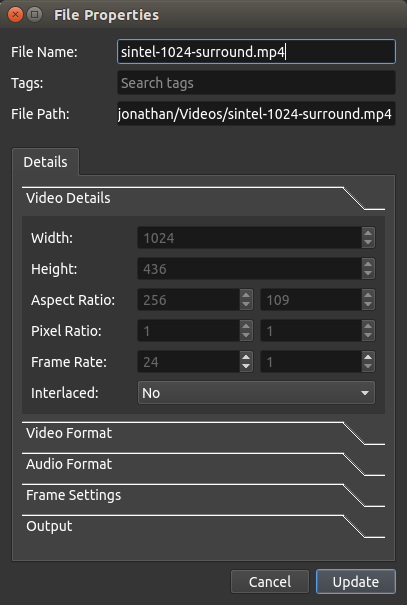 One of the biggest challenges for testers and myself is to speed up the cycle from bug fix to testable release. While some users compile everything manually, and some Linux users get updates delivered through our PPA, Windows, Mac, and certain Linux users must wait for me to create a new installer (which takes lots of time). So, I have built a cross-platform build server (i.e. really just a cool Python script which is scheduled to run every few hours). It checks Git for updates, re-compiles libraries, freezes the OpenShot Python 3 application (along with dependencies), signs the Windows / Mac versions, and uploads the files to Amazon S3, and lists these files on the openshot.org website. I currently have 3 build servers running (Windows 10, OS X 10.11, Ubuntu 14.04) and creating builds automatically.

To see the list of recent builds for your operating system, just click the “Other Downloads” link on www.openshot.org/download:

Updated AngularJS from v1.2.16 to v1.2.29. I'm seeing much faster performance with animation and dragging / dropping on the timeline. At some point, we'll probably move to the latest version of AngularJS, but that will likely break a few things, which is why I'm holding off for now.

I’m very excited to debut a new Linux version of OpenShot 2.0, using the AppImage format. This format uses a single file to download, mark as executable, and then launch. All needed dependencies are included in this file, and it does not need to be “installed”. This is similar to the Mac DMG approach, and works with the latest version of Arch, Debian, Fedora, Gentoo, openSUSE, Ubuntu (and probably more, but I've actually tested those).

Added more error logging and exception handling around saving projects, and added additional try/catch blocks around making paths relative, making paths absolute, and moving temp files. Basically, it can error on those methods, log the errors, but the project will still be saved successfully.

ImageMagick support is now an optional dependency, which is great news for those who would like to compile OpenShot on Windows. This was by far the most difficult dependency to deal with on Windows, and the most difficult dependency to ship with OS X. So, it has been removed from the Mac and Windows versions of OpenShot, and made optional for anyone wanting to compile things themselves.

All translations have been updated, and I’ve personally tested more than 50 languages, fixing errors such as missing string formatting tokens, etc… A huge thanks to all the contributors that have helped improve the translations. It still amazes me to watch OpenShot transform into another language. So cool!